In today’s world, online dating success stories are aplenty. In fact, meeting someone with the help of Internet quickly becomes a prevalent mode of operation for singles over 30. It’s understandable: By this age the majority of people are already involved with someone and finding an unattached person among your friends is all but impossible. You basically stop making new friends and hang onto existing ones. This is why online methods of connecting with new people are so attractive.

However, even in this world rich with amazing accounts, there are some narratives that may leave you gasping.

It is with the help of the almighty World Wide Web that certain encounters are made possible. Incredible love stories start every day of the week and some of them are truly remarkable while others are rather bizarre. 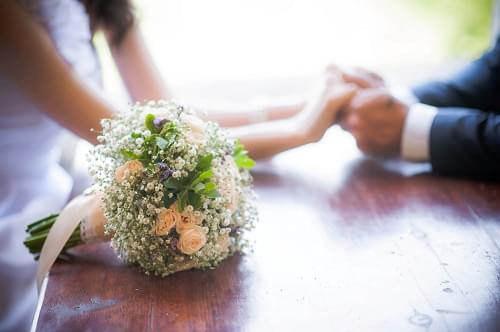 Twin sisters from Perth, Australia, Lucy and Anna DeCinque, are in love with the same guy for 5 years. But they don’t fight over him and aren’t jealous of each other. The girls simply share a boyfriend. The participants of the unusual trio are deeply in love and live together under the same roof. Recently 30-year-old twin sisters got engaged with the love of their life and proudly demonstrated giant engagement rings in a YouTube video. 31-year-old Ben Byrnes confessed that pleasing two active ladies was a bit hard to manage initially, although his problem was rather fascinating to his mates.

Now the odd romantic partners plan a wedding. Australian laws don’t allow an official registration of a marriage to two women, so the ceremony can only be informal. The twins started to live together with their common boyfriend under the same roof in their mother’s house. The matriarch of the family approved of the daughters’ choice, stating Ben was a real gentleman and treated her girls well. Ben thinks the girls’ desire to always be together is understandable, since he is a twin himself. The sisters communicated with their future boyfriend for half a year online before the first meeting.

Mike from Austria had been looking for love online for 5 years when he decided to pay for membership to a dating site one final time. If nothing came out of it, he resumed to give up. It was by the end of his half-year membership term that suddenly a profile of a girl named Yana, which he saw previously and really liked, was updated with a new location. She moved from Dubai to Europe, closer to where Mike resided and worked. Now he could simply drive to see her.

This is exactly what he did. After chatting online for a few weeks, they got together and realized they were meant for each other. In exactly 1 month after the first face to face meeting the pair signed a wedding register and became spouses officially. Success may not come straight away but those who seek shall have their prayers answered, the newlywed husband believes.

3. Love affair of a man with no penis

UK resident Andrew Wardle managed to delay love making to his girlfriend for a year. The man was born with a rare birth defect that left him with no penis, although he had functional testicles. Even his bladder was located outside his body, which was corrected surgically and allowed Andrew to lead basically normal life, except for that one thing requiring a functioning male organ.

However, after many failed attempts to find a lasting romance (and over 100 intimate female partners), 40-year-old Wardle fell in love with a 24-year-old Fedra Fabian born in Hungary. After telling to his girlfriend various stories for a year, Andrew decided it was time to open up about his condition. So, he gave an interview to a British tabloid. The day before the interview was to be published, he told the truth to Fabiana.

Unlike his other girlfriends before (Andrew even got punched in the face once), the Hungarian beauty decided to stick by her guy. By that time Wardle knew his birth defect could be corrected through a series of operations. The surgeons even said he could have kids if everything went according to the plan. Although Fedra was initially shocked, she understood how hard it would be for her partner to open up. After a depression and thoughts of suicide, the man without penis is now in love and engaged to a lovely lady 16 years his junior.

Jari from Finland was busy answering messages in his online dating account when he saw a mail from Lyudmila. The guy remembered her photo: He got an expression of interest from her a few days before and answered “No”. “Strange girl”, he decided, why would she write again after a refusal? When Jari checked outgoing messages, he discovered that by mistake he apparently clicked a wrong button and posted a positive answer. He refused was because of apprehension that he wouldn’t match high standards of the pretty young lady outlined in her profile.

The pair began chatting and realized they couldn’t live a day without conversing with the newly found online pen pal. Within a year, the pair got married. They happy newlyweds believe that it was the hand of destiny that brought them together, how perfect they are as partners, and call their magical connection a miracle.

The wheelchair-bound Svetlana from Belarus started using an international dating site with virtually no hope to find a partner. The lady was born with a rare condition affecting her muscles, which was discovered when she was only 3 years old. Svetlana was surprised when she got plenty of responses from all over the world. However, due to the high number of requests and feeling overwhelmed, she decided to hide her profile. But she was still talking online to two men. One of them, an American bachelor called Shiloh, also had a condition affecting his health. The pigmentation disorder made him look unusual for an African American with his skin turning abnormally pale.

The duo met in person after 8 month of communication and it was even better than they expected. Shiloh went home and returned with a wedding dress for Svetlana. Svetlana’s parents didn’t believe in the online romance and hoped the guy would disappear. But the American groom managed to convince the folks to allow their daughter to marry him. The pair was blessed by the Patriarch himself (the head of Orthodox Christian Church in Belarus) and married in the main Cathedral—the honour normally reserved for a selected few. The American husband moved to Belarus to live with his wife. Shiloh became an online tutor of English and also learned to crochet, selling handmade clothing to support his family.

If you ask around, you are likely to discover other accounts of Internet romances that changed lives of people and made their world larger and brighter. Every day millions of users begin online conversations with virtual strangers who may greatly transform their future. Plenty of them will become a success although not each and every one.

People who seemingly are bound to stay single manage to attain love with the help on Internet and online dating sites. If you would love to design your own dating success story, the first step is to register on a singles portal and start communicating. Good luck!

Elena Petrova is an online dating coach with a 17-year-experience in the industry of relationships. She loves happy endings and strives to assist singles in making their dreams of finding a perfect partner come true.